On May 27th votes will be cast for the next leader of the federal Conservative party. If you’ve been following the race you probably know that it’s a complex one; there are 13 candidates and the leader will be decided through ranked voting. To make it even more exciting, one of the top contenders, Dragon Den star and business mogul Kevin O’Leary pulled out of the race last month. That leaves Quebec MP Maxime Bernier with the most likely lead, but in a ranked ballot system, almost anything could happen. Let me explain why, and then review the various candidates in the running.

Whether you are voting in this leadership race or not, it is useful to know how a preferential ballot system works. The premise of the system is to ensure the winner is someone with a strong preference by a majority of voters. Voters rank their candidates from most to least preferred. If no name has a majority of the first place candidates, then the second place votes will also be counted. And so on, and so forth, until one name has greater than 50% support (Hill Times).

In the Conservative leadership race there is an added complexity, as what enables a candidate to win is points, not votes. Each riding is worth 100 points, regardless of size, and each candidate is allotted a percentage of the points based on the percentage of the first round votes they received. Simple enough. But it is not expected that any candidate will have a clear majority after the first round, as there are 13 candidates in this race, and each voter gets to rank ten of them. What happens next is that the candidate with the least number of votes has their points reallocated based on the second round choices. This will continue until one candidate has 16901 points, the required number for a majority.  (For an even more depth explanation, see this CTV article.

Now that we know how the vote will work, let’s take a look at the candidates and their platforms. I’ve listed only the top 10, and have ordered them in terms of their % support, as indicated in a poll conducted by Mainstreet Research for iPolitics. From the controversial Kellie Leitch to some names you may never have heard, here are the top 10 Conservative Leadership race candidates:

Age: 54
Hometown: St-Georges-de-Beauce, Quebec
In Politics Since: 2003
Key Policies Include: Decentralizing government, eliminating trade barriers across provinces and other nations, eliminating supply-chain management, eliminating the carbon tax
What You Should Know: Bernier defines himself as a libertarian and states that were he to become Prime Minister he would stay true to those principles. His policies to decentralize government and rid Canada of the supply-chain management system currently overseeing the dairy industry reflect this. He served as Minister of Foreign Affairs and Minister of State for Small Business and Tourism under the Harper government. Unfortunately Bernier is also well known for a scandal where he left classified files at the home of his then-girlfriend who has ties to the Hells Angels biker gang.
Site: http://www.maximebernier.com/

Age: 37
Hometown: Ottawa, Ontario (but has lived in Saskatchewan since a young adult)
In Politics Since: 2004
Key Policies Include: Supporting religious freedoms, free speech (particularly on campuses), increasing free trade agreements, opening up the airline industry to competition, eliminating the carbon tax
What You Should Know: Scheer promotes that he is a family man at heart. He is the father of five children, and his policies include reducing taxes for working parents. He was Speaker of the House for four years in the Harper government, and is the youngest person running for the Conservative leadership. In my opinion there is nothing ultra-controversial in his platform for the average Conservative, and that could be aiding his success.
Site: http://www.andrewscheer.com/

Age: 46
Hometown: Winnipeg, Manitoba (but spent her childhood in Fort McMurray, Alberta)
In Politics Since: 2010
Key Policies Include: Screening immigrants for Canadian values, dismantling the CBC, a system for citizen-initiated referendums, opposing the legalization of marijuana, eliminating the carbon tax
What You Should Know: Chances are you already know of Kellie Leitch due to her populist policy to screen new immigrants to ensure they reflect Canadian values. This and some of her other policies, such as ridding government funding from the CBC, have given her a bad reputation and even generated comparisons to Donald Trump. What you may not know is that she is an extremely accomplished woman: she is an Orthopedic Surgeon with an MBA, named one of Canada’s Top 40 under 40, and received the Order of Ontario. This makes it all the more unfortunate that she would run on a populist, and arguably divisive, platform.
Site: https://kellieworks.ca/

Age: 44
Hometown: Montreal, Quebec (but raised in Bowmanville and Port Perry, Ontario)
In Politics Since: 2012
Key Policies Include: Investing in youth underemployment, better supporting our Veterans, a thorough plan that protects the environment but still eliminates the carbon tax, restructuring immigration policies
What You Should Know: O’Toole is a lawyer, retired Veteran and former Minister of Veteran Affairs who seems committed to improving his community and communities across Canada. It’s clear a lot of work went into building his policy platform, as it is extremely detailed. That being said, it becomes unclear what the main points are that he stands for aside from supporting Veterans and the Military.
Site: http://erinotoole.ca/home/

Age: 48
Hometown: Cape Breton, Nova Scotia
In Politics Since: 2008
Key Policies Include: Changes to healthcare such as a national drug coverage plan, decentralizing government, investing in infrastructure, eliminating the carbon tax
What You Should Know: Under the Harper government Raitt served as Minister of Natural Resources, Minister of Labour and Minister of Transport. She has a Master’s degree in Science and a degree in Law. As Minister of Labour she helped launch Bell Let’s Talk. Much of her platform is traditional conservative, and like Scheer, I find nothing too controversial.
Site: http://www.lisa2019.ca/

Age: 45
Hometown: Fergus, Ontario
In Politics Since: 2004
Key Policies Include: A revenue neutral carbon tax, reforming political parties and the House of Commons, making housing affordable, investing in small business
What You Should Know: Michael Chong was once known for being the Cabinet Minister who resigned in protest of Harper’s motion to recognize the Quebecois as a nation within Canada. True to his principles, Chong is also the only candidate who supports a carbon tax, albeit a revenue neutral one. He is a proud son of immigrant parents, studied at the University of Toronto and has extensive experience in the private sector. Chong sets himself apart as a fiscally conservative, but also progressive candidate.
Site: https://www.chong.ca/

Age: 53
Hometown: Embrun, Ontario
In Politics Since: 2006 (until 2015)
Key Policies Include: Supporting parents as the first educators of their children, reopening the pro-life debate, supporting freedom of speech and specifically against political correctness, repealing the carbon tax
What You Should Know: Lemieux is a social conservative as well as a fiscal one. He opposes same-sex marriage, abortion, and doctor-assisted dying, to name a few. He was an MP from 2006-2015, after completing a 20 year career in the military.
Site: http://www.pierrelemieux.ca/

Age: 42
Hometown: Langenburg, Saskatchewan
In Politics Since: 2004
Key Policies Include: Defending pro-life motions, privatizing the CBC, selective immigration policies that discriminate against states known for Islamic extremism, eliminating the carbon tax
What You Should Know: A Saskatchewan native and former geophysicist, since being in public office Trost has done a lot of work on energy, mining and agriculture. He founded the Conservative Party’s Energy Caucus and is currently the Conservative Party Opposition Critic for Canada-US relations. Like Lemieux, Trost is a social conservative and touts this through his “100% conservative” branding; he is pro-life and against same-sex marriage.
Site: https://brad4leader.ca/

Age: 51
Hometown: Sherbrooke, Quebec
In Politics Since: 2006
Key Policies Include: Banning wearing of the niqab at Citizenship ceremonies, expanding security measures, enhanced support of Veterans, eliminating the carbon tax
What You Should Know: Blaney’s site does not have a lot of details on his policies, but you can get an idea of what he stands for by looking at his history. He is an engineer and has served as Minister of Public Safety and Minister of Veteran Affairs. He seems to support similar Conservative ideologies to others in this race, including maintaining the supply management system, increasing security and screening of new Canadians, and supporting Veterans. He has also come under fire for saying that he would “dismantle reserves” to allow First Nations people to become “fully Canadian.” (Huffington Post, CBC)
Site: https://blaney2017.ca/en

Age: 48
Hometown: Toronto, Ontario
In Politics Since: 2009 (until 2015)
Key Policies Include: Streamlining immigration for refugees, improving access to healthcare, taking action to support First Nations peoples including access to clean water and mental health support, protecting Canada’s wilderness, eliminating the carbon tax
What You Should Know: Alexander spent many years in the Foreign Service, working in Russia and Afghanistan. He even authored a book about his time in Afghanistan. During the Harper years he served as Minister of Citizenship and Immigration, but was criticized for his responses to the Syrian refugee crisis. Alongside fellow MP Kellie Leitch, Alexander was one of the proponents of the ‘barbaric-cultural-practices tip line’. Based on this history, it appears Alexander is trying to rebrand himself with a policy platform in support of immigration. (Huffington Post)
Site: http://chrisalexander.ca/

While I’ve only reviewed 10 candidates above (enough to fill your ballot should you want to!), there are actually 13 total vying for the leadership. For more on each of the candidates, see this Globe and Mail summary. Happy Voting! 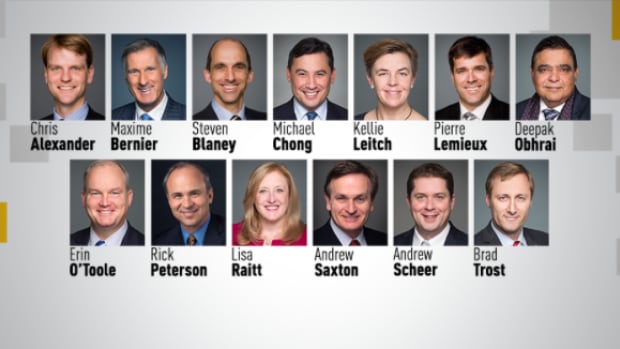 All 13 candidates pictured above, Source: CBC